On Monday morning, all I wanted to do was sleep in. Those campers wore me out… but I brewed some coffee and got my butt in gear. I had to unpack from the camp and repack for Colorado, and I had to review my materials for that evening’s city council meeting.

I downloaded, uploaded, read, notated, washed, dried, folded, rolled, charged, dusted, packed, unpacked, and repacked. I was pretty close to having my luggage packed and ready to leave for the airport, but I had to head out for my council meeting, so I kissed Brian goodbye and left.

This is a perfect bag, in my opinion. Camera gear and fly reels combined make for a fabulous trip! 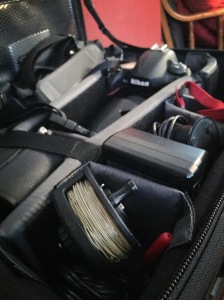 Our 7:00 council meeting went a little on the long side… and I got home shortly after midnight. I needed to leave the house at 1:30 to get to the Milwaukee airport on time, and it took me a little while to unwind and finish packing, so I took a 35 minute nap in Brian’s arms on the couch, then headed out to the airport.

That wasn’t enough sleep. It was a rough drive, complete with the eerie quality of an empty interstate at 3:30 am, and my constant desire to stop for donuts, which tested my self control.
I made it to the airport, and as I boarded my plane, rod tube in hand, I heard someone call my name. I looked up and saw my friend, Jon Christiansen!

I was able to sleep (though fitfully) for a couple hours on the plane, and I was woken up by the jostling during landing.
Jon waited for me after we landed, carefully placed a few special flies in my hand, and wished me luck on my Colorado adventure.

My luggage was already on the carousel when I arrived at baggage claim, and Aaron was waiting to pick me up, as well!

As soon as we drove out of the Denver airport, I saw the mountains in the distance. They’re just amazing! We stopped at Aaron’s apartment to drop off my gear, then went to drop him off at work. As I dropped him off, he said, “Two rules: don’t kill yourself, and don’t hurt my car.” He then dropped a spare set of keys in my hand and ushered me off for some “Heidi adventures.” I have the BEST friends!

Of course, I was too tired to do anything. I had meant well, when booking that early flight, but I couldn’t have known that I’d be stuck in a five hour meeting and not be able to get any sleep. I wasn’t quite ready to lose my whole first day in Colorado, though, so I grabbed coffee from Starbucks then reclined in the parking lot and slept soundly for a few hours. I’m always running around (at least) just a little tired, and I’m one of those lucky people who can fall asleep pretty much anywhere. Naps are one of my best friends! I felt slightly better after my nap, so I headed down to the pedestrian mall in downtown Boulder. It’s a beautifully designed city! After becoming an alderwoman, I look at cities much differently.

I did a little shopping, since of course I forgot a few things. Their downtown has some of my favorite stores, including Lush, Patagonia, and prAna. Yoga classes, anyone? 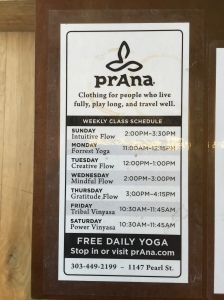 It started raining, so I played in the puddles, ate lunch from a food truck, drank more coffee…

…and visited a fly shop.

After asking about good local water, I decided to take a short drive along Boulder Creek to check it out. Winding through mountains following a stream is one of my new favorite things to do.

Boulder: where even the fire hydrants are pretty.

Before I knew it, I had to head back to pick up Aaron from work. We went to dinner at Southern Sun Pub and Brewery, and after a good Colorado beer, I fell sound asleep around 8 pm!

Up next? Climbing The Incline, taking photos, and meeting a Boulder friend. 🙂

One response to “Chasing Adventure: Colorado, Day One”