After months of struggling with low weight gain and severe reflux, we got a diagnosis for Teddy.

As some of you know, we’ve worked hard to get Teddy back on the weight chart. He was born around 50%, then dropped down to 5%, then 2%. We were able to keep him at 2% with a constant battle… his reflux meant that he needed to eat frequently and often spit up a LOT. The more his reflux caused a loss of milk, the more formula I tried to supplement with. I constantly worried about my milk supply and when he would spit up ounces of my milk, I cried. We tried a bunch of different formulas to see if any of them made a difference in his reflux. They didn’t. When I had to be apart from Teddy, and he got formula, much of it came back up. All over me. All over him. All over the couch. And the floor. And his dad. And the carseat. And the bed. And the rock and play. And the blankets. I bought a special breastmilk removal soap and put it in every load of laundry to try and salvage some of our clothes. I wanted to pump milk to give him, but I didn’t make enough extra to pump and save it for later. If I pumped, then I wouldn’t have enough milk for his next nursing session. I felt so inadequate.

Having a doctor tell us that there is, indeed, something wrong, made me feel so relieved. As if it wasn’t entirely my fault, and some of my guilt started to lift. I felt like such a bad mom, even though I basically dropped everything and spent my entire day trying to make him gain weight.

What is his diagnosis?

I was so relieved to have a diagnosis and a name for the group of symptoms because I thought it would mean some answers for us and a clear path forward. Instead, FPIES raises more questions. It also basically forces us to make some serious decisions about Teddy and his virtual life.

How much of his life do we have the right to share? When I told people that Teddy had severe reflux and that we couldn’t be separated for long, they thought I was being difficult. I didn’t know if we should tell everyone about his FPIES. People saw me taking him everywhere and wondered why I couldn’t just get back to work without him or something like that.

I know that it’s healthy for moms to leave their babes with someone else and take a break. The thing is, I often have more stress when we’re apart because I’m worried about how his reflux is doing and how his tummy feels. When he’s upset and not feeling well, it’s like he’s a colicky baby, and that’s so much to ask of a friend or babysitter.

“Why can’t you just give him formula?” Well, I can, but it makes his reflux much worse. It often almost veered into vomiting territory.

“Why can’t you just pump and give him a bottle with pumped breastmilk?” Well, I don’t make more milk than he needs. In fact, when his reflux is flaring and he spits up so much milk, I barely make enough for him.

“Why don’t you try (insert lactation supplement here) to increase your supply?” I have. I am. Herbal supplements, power pumping, meditation and deep breathing. I’m trying to relax but I’m watching my skinny baby and feeling like a failure.

FPIES babies aren’t like normal babies. The challenges are different, and finding solutions can be really difficult.

It’s a rare disease, and many doctors don’t know what it is. Teddy’s pediatric immunologist/allergist gave us a letter to give to the ER doctor, describing FPIES. Kids with FPIES reactions often vomit until they go into shock, so he wanted us to have the letter ready for our inevitable trip to the ER. That whole idea is so scary- that we’d get to the ER and the doctor wouldn’t have any idea what FPIES is.

What should I tell people? Do I have a right to tell the world about his FPIES? How can I make people understand our challenges without telling them about it? Obviously, we’ve decided to share his diagnosis with the world. I hope that maybe another struggling mom or dad will find this post and discover that they’re not alone. I also hope that it explains why Teddy and I go almost everywhere together and why being separated is a little more difficult for us than it is for other parents and babies.

So what IS it? FPIES is a type of food allergy that affects his GI tract. The allergy is to the proteins in different foods, and instead of a typical food allergy reaction with a rash or having trouble breathing, the reaction is a slightly delayed (2-4 hours after exposure) intense vomiting episode.

One of the scariest things about FPIES is that kids can have foods several times (so parents think the food is safe) then they develop an allergy to it. This is what happened to Teddy. He had oatmeal several times and was totally fine. In fact, he loves it!

Then all of a sudden, he got really sick a couple hours after eating. He threw up for 20 hours. He was so scared, because it was the first time he’d thrown up. We were so scared, too. We were trying to give him little bits of pedialyte to keep him hydrated but he started to go into shock. Our poor little baby was pale and lethargic. We took him to the doctor, and they thought he had a stomach bug. It didn’t occur to us that it was the oatmeal- he’d had it before with no problems. 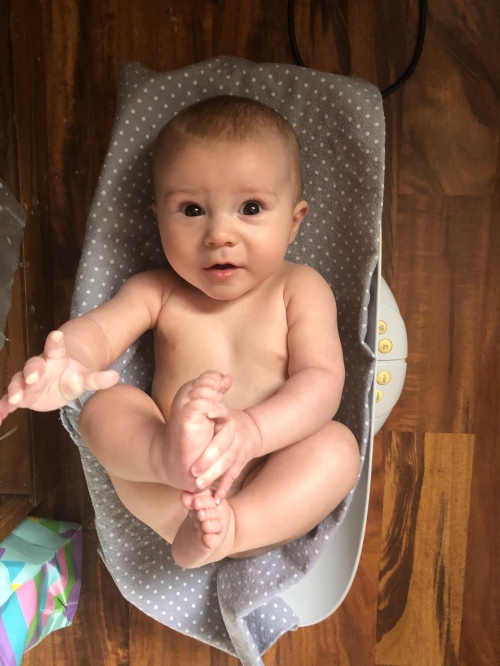 (Teddy on our home baby scale)

The next time we gave him oatmeal, it was the same reaction. We were a little more prepared but still scared. We talked to his doctor, and they said he must have some kind of oat allergy. I was so afraid to feed him anything, but we know he needed to start eating food. He was also so thin. That day of vomiting caused his weight to drop right off the bottom of the weight chart- after we’d worked so hard to get him up to 2%!

We decided to try rice cereal, since it’s supposed to be so easy to digest. I made him one teaspoon of rice cereal, and it was extra watered down.

Two hours after eating, he had a reaction. Luckily, he only threw up for about five hours with rice- I think due to the very small amount that he’d ingested.

We knew something was wrong- TWO foods with this awful reaction? His pediatrician referred us to a pediatric GI specialist, who diagnosed him immediately. She gave us a prescription for an elemental formula, which is dairy- and soy-free, amino acid based, and hypoallergenic. We started supplementing with this formula at night to try and encourage some weight gain. The formula is $50 a can, so it’s very expensive, and I’m incredibly thankful that I’m able to nurse him. That formula makes it possible for us to be apart for a little longer at a time, and for that I’m so thankful.

(Teddy with his GI specialist)

We think that his FPIES triggers include dairy and soy, as well- so his reflux and low weight gain was probably a symptom of him reacting to the dairy and soy in the regular formula that we were giving him. The thinner he got, the more formula I tried to give him on top of breastfeeding. It turns out that we may have been making things worse.

For now, Teddy Bear is doing great. He’s up to 8% on the weight chart! His reflux is almost gone. The tricky thing with FPIES is that there is no test for the allergy- babies need to eat a variety of foods to discover their triggers. The symptoms range from constipation to diarrhea, from vomiting to diaper rash. I am constantly tracking what he eats, when he eats it, and watching for any kind of reaction. There are different theories about how to prevent kids from developing allergies to foods that were previously considered “safe,” but most parents believe that continued exposure is the key. That was easy to do when there were only three foods that he could eat- but now that he’s up to 11, it’s getting harder! I’m trying not to go more than a couple days between exposures to his safe foods, so we’re making lots of purée mixes and he gets a lot of variety. 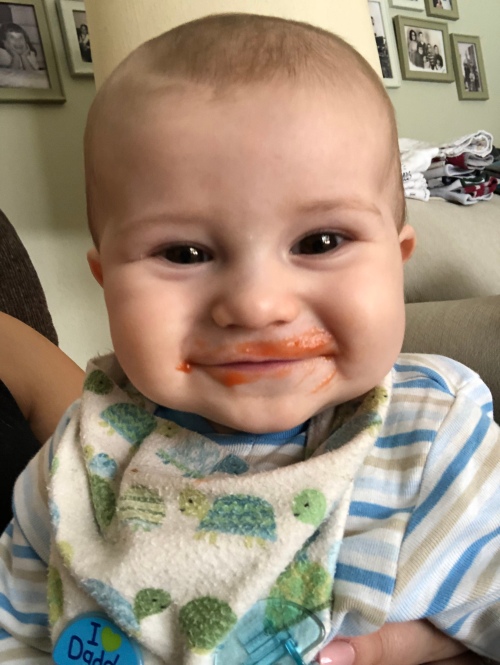 It feels a little like a weight off my shoulders to write about FPIES. Honestly, I was so burned out from the constant criticism in my city council position that hearing people question my decision to resign really pushed me over the edge. I told the public that I was resigning to take care of my sick baby, but that apparently wasn’t a good enough reason. People demanded more information- and insinuated that there was a different reason for me leaving.

Well, here you go, John Q. Public- our family is struggling with FPIES. Teddy needs a little more of my time than I expected, so I’m choosing to focus on him and helping him grow up healthy and strong.

He is doing much better, though we are struggling with other digestive problems as we start to identify more problem foods for him. I’m happy that we have an idea of where to go from here, and there are FPIES support groups that have been helpful.

We have an appointment with a pediatric nutritionist this month to help us come up with some “finger foods” for Teddy to start feeding himself, since most of the easily dissolvable baby foods contain rice.

Now that he’s feeling better most of the time, his personality is really showing. He’s a very happy, easygoing boy. His smile lights up a room.

Part of me feels guilty for talking about how difficult this has been because I know there are so many people out there who desperately want to have a babe of their own. After all of our struggles with infertility, you’d think that I’d be able to take this challenge in stride and be thankful that I have our miracle. I also feel guilty since I get to stay with Teddy most of the time. I don’t know how FPIES parents that have to work full time can do it. They are true super-parents.

So there you have it. Teddy and I are pretty much inseparable for now, and I’m learning how to rearrange my life and my work around him. I’ve been taking on clients that understand the situation and are patient with me. I’m so thankful for that.

As always, thanks for reading, friends.